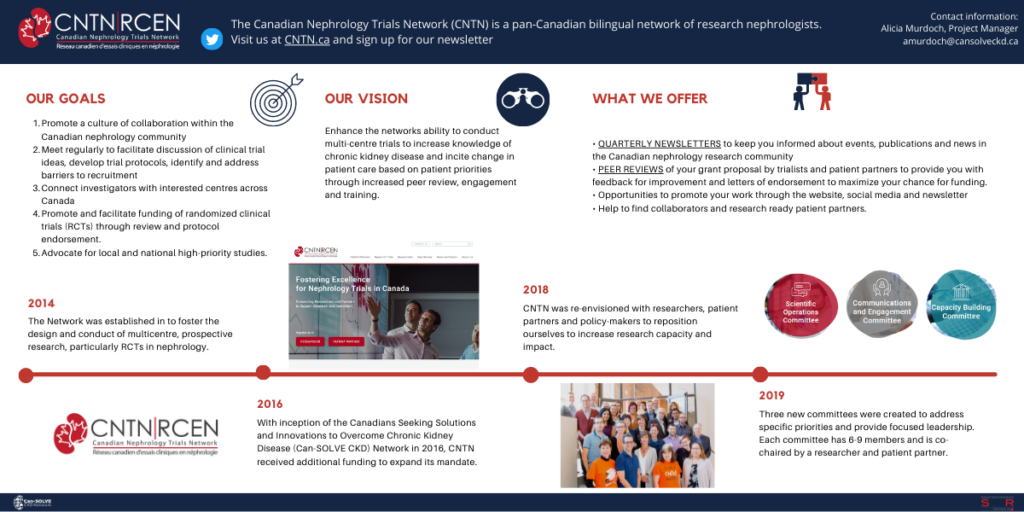 A poster showcasing CNTN was available for view and to download at the recent Can-SOLVE CKD Network Annual Meeting September 9 and 10. The poster highlighted a timeline from inception to now, as well as highlighting our network goals, vision and what we offer. PDF version available here: CNTN Infographic PDF

Recording of the Annual Meeting available

The paper has been summarized into a slide deck and user guide for developing clinical trial protocols. Click on the link to download the PDF and Powerpoint slides.

In the most recent issue of the Canadian Medical Association Journal, Drs. Srinivas Murthy, Robert A. Fowler and Andreas Laupacis wrote an editorial about how the speed with which the UK executed the nation-wide priority-driven RECOVERY trial is not currently possible in Canada.

From the editorial: “Those who manage and fund Canada’s health care systems need to view high-priority trials as an integral part of clinical care and to provide adequate and stable infrastructure funding, thus avoiding the current time-consuming and expensive process of developing separate data-sharing agreements and contracts with many hospitals and organizations. ”

You view the editorial online or download a PDF copy.

Patient engagement is a relatively new way of conducting research in Canada and many researchers are probably still wondering how to do it well. Dr. Simon Hatcher and his team at the Ottawa Hospital developed a graphic novel style tip sheet, “Top 10 Recommendations for Researchers Working with Lived Experience Partners“. 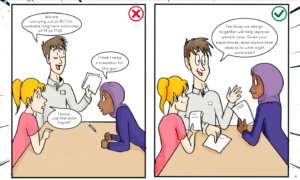 The comic was created by people with lived experience of suicide at the REFLECT research forum which brought together patients and caregivers as well as suicide prevention researchers, trainees and policy-makers.

The top 10 recommendations are:

Dr. Bhanu Prasad and his research team are conducting a feasibility study of a randomized controlled trial investigating renal denervation as a possible treatment option in patients with Loin Pain Hematuria Syndrome (LPHS). Dr. Prasad presented this study at the CNTN meeting in November 2019 in Washington, D.C and we look forward to hearing more about the study at future CNTN meetings.

Loin Pain Hematuria Syndrome (LPHS) is a poorly understood clinical condition characterized by severe pain localized to the kidney but in the absence of identifiable urinary tract disease. Case reports/series have shown renal denervation via catheter-based radiofrequency ablation to be an effective therapeutic option for the treatment of LPHS. To determine whether catheter-based renal denervation is a meaningful addition to the treatment options in these often difficult to treat LPHS patients, a randomized clinical trial is needed. Prior to conducting a definitive trial that focuses on patient outcomes, ensuring the feasibility of undertaking such a trial is required. As such, we will conduct a single-centre randomized control feasibility trial designed to determine viability and provide framework and direction for a larger trial.

The research team will conduct a double-blinded, parallel-group, partial crossover, sham-controlled, randomized feasibility trial on 10 LPHS patients at the Regina General Hospital, Saskatchewan. Participants will be randomized into either renal denervation (treatment group) or a sham treatment (control group). Data (pain, quality of life, mood, disability) will be collected from both groups at baseline, 6 weeks, 3 and 6 months after the intervention. After the initial 6-month follow-up is over, the participants who received the sham procedure will cross over into the treatment group and will be followed for an additional 6 months in the same manner as the treatment group.

The lessons learnt from this trial will lay the framework and direction for conducting a multi-site randomized controlled trial involving a larger cohort of patients.

On behalf of the network, an abstract was submitted and accept for the CSN annual general meeting entitled, “A New Vision for Nephrology Trials in Canada” . The meeting was cancelled but the poster was submitted and can be found on the Can-SOLVE CKD website and the CSN poster website.

As part of the Can-SOLVE CKD virtual network update, a short 7-minute presentation was given by Alicia Murdoch, the CNTN coordinator. You can view the recording of the presentation here.

The Canadian Journal of Kidney Health and Disease has published the recommendations of the CSN Rapid Response Team regarding home dialysis. You can read the full article here.

The Canadian Society of Nephrology (CSN) announced their new president and board of directors today. We are pleased to share that 3 CNTN committee members are on the new board.

Rita Suri, member of the Scientific Operations and Executive committees, will be the chair of the CSN Scientific committee.

Amber Molnar, co-chair of the Communications and Engagement committee, will be representing the province of Ontario on the CSN board.

Bhanu Prasad, member of the Communications and Engagement committee, will be the chair of the CSN Community Nephrology committee.

Congratulations to everyone who was elected to the board.